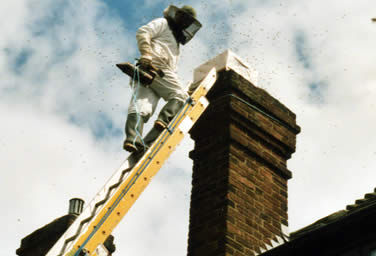 Removing an established honeybee colony from a chimney. Photograph by Gregory Boon © 2002

European honey bees require protection from the elements, a store of food (40lbs+honey 5lbs+ pollen) to carry them through the winter period when between 6,000 and 12,000 workers together with the queen are present. They increase to 90,000 workers, a queen and some 200 drones by July. 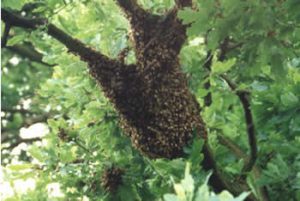 Shelter, where ever bees have lived they will always live, i.e. hive, skep, chimney flue, roof, soffit/ facia, behind tile hanging above ceilings in dormers etc. The only way to not have bees in residence is to prevent access, almost impossible or to fill the voids. Bees require 3 cubic feet of space (810 cu. Centimetres) If they have less space then the tendency to swarm is increased.

From 1994 in South East England conditions have changed, there are thousands of colonies fewer, the Environment is adversely affected, an Asiatic mite, varroa destructor is here, hundreds of bee keepers have given up. The mite sucks the hæmolymph from the bees and in doing so injects a paralysis virus causing the adult bees death, the mite breeding cycle causes loss of worker pupae and greatly increase the demise of hived and feral colonies, the remaining bees abscond to join healthy colonies infesting them.

Any colony present in a dwelling will therefore die out, often during late Winter or early Spring, all infected colonies will succumb within three years maximum. Only by continual swarming as at present will any bees survive outside the control of bee keepers. 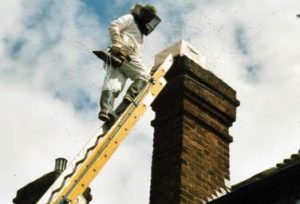 Removing an established honeybee colony from a chimney – a dangerous job without scaffolding. Photograph by Gregory Boon © 2002

Removal of colonies from buildings is simple if done promptly when a swarm arrives, or with established colonies the best removal period is early April through to the middle of May, this is a period when the colony is expanding rapidly and honey present is minimal. (Climate change now brings this forward by two weeks in 2000 & in 2002 by five weeks)

Costs, expensive in terms of building work since wild bees live high, hollows in trees being the natural home. In walls and above ceilings the plaster is best removed and is the cheapest for reinstatement. Tile hanging in good order should not be disturbed, in poor order then complete retiling with fibre glass or rockwool inserted between the studs. Facias and soffitts require to be ventilated under current building regulations. Bees require only a quarter inch hole for access.

Chimneys, bees occupy only disused flues, they recognise used flues although the odd error can happen. In the case of flues there is no need to do anything other than smoke out an incoming swarm, after three days they will not leave. Established colonies are easily removed however the costs must include a scaffold for chimneys and similar high locations. [For further information about bees in chimneys, see here.]

Poisoning is an option, however the costs are similar simply because a food substance, honey, is involved, all honey has to be removed and destroyed as it will be contaminated with pesticide which will end up in hives killing bees and in honey for human consumption. Bees are excellent thieves. Removal costs run between a £150 & £500 where scaffolding is involved. Because the bees will die and others will reoccupy my advice is to wait till bees die out and seal up entrances and any local access points. There is often honey left now upwards of 40-100lbs. This will eventually seep out as a wax moth undertaker arrives to consume the brood combs. The very strong but delicate engineering work done by the bees is quickly undone by the moth larvae, the result is pounds of honey cascading down the chimney or seeping through walls and ceilings and floors.

As with everything prevention is better than cure, the likelihood of bees taking up residence in your house is as good as you winning £5 million on the lottery jackpot unless there have been bees there before, even twenty years ago, then the odds reduce substantially. They increase where bees have previously resided.

What are the consequences of living with bees, realistically most of time you would not be bothered by them. Your home already contains many animals, plants and bacteria some of which you are aware and some you have not considered. Global warming, climate change and varroa has affected the bees and consequently how they will impinge on you. Bees resident at 2,5 metres high or less are likely to be bothersome when you are active within a three metre radius of their entrance, incidentally their entrances are always external and rarely more than one and then close to the nest. I am aware of two to three entrances as much as 2 metres apart and of one entrance two metres from the nest.

Where the nest is more than three metres high and two metres away from a window then there really is no problem in my view, the problem lies then with the attitude of the householder. The exception to this must be for the few people who are extremely allergic to bites and stings from any insects and who will suffer anaphylactic shock and will die as a result unless they receive a subcutaneous andrenlin injection to bring up their heartbeat to normal, these people now carry their own Epi-pen to self inject. The rest of you suffer reactions to stings in varying degrees but to a single or even ten stings there is normally nothing other than discomfort in the form of pain for up to five minutes and itching for perhaps two days. As a regularly stung bee keeper I suffer the pain for a few seconds or a half minute, no itching or irritation, if I receive two or three hundred stings within an hour or two then I might suffer some localised swelling. Bees do not normally sting aggressively except in defence of their immediate colony and if they do suddenly become aggressive then there is an underlying reason which often has to do with a foul smell, excessive heat, poison which affects their mobility senses or some similar disaster. Bees resident in roofs and chimney present no danger whatsoever until the builder is needed, bees dislike sweaty animals including humans and will sting them within close proximity of the nest. Beware! Bees in your garden present no danger at all, watch them visit the flowers collecting nectar, watch them clean pollen from their bodies and pack it into the pollen baskets on their hind legs, note the different colours of the pollen.

Solitary and bumble bees, most solitary bees do not sting or have an ineffective sting which will not penetrate your skin, bumble bees are far less likely to sting even than honeybees, you would have to squash them before they will sting. It is UNLAWFUL to poison any of these bees and there are 20 different bumbles and some 200 different solitaries. Any one successfully prosecuted can face up to a £25k fine in the Magistrates Court and unlimited fine in the Crown Court, in effect the level of fine imposed averages £1,6k for this offence presently.

Finding a beekeeper who is also a qualified builder is nowadays sadly very difficult.

Dependant upon the health & Varroa infestation level colonies might be starving or a strong colony could have stored anything up to 100lbs of honey. Because honeybees are classified as FOOD PRODUCING ANIMALS precautions must be taken to prevent any contaminated honey being carried away and stored in beehives for human consumption. A possible method to allow building works to progress alongside resident bees might be possible by putting up a temporary screen to cause the bees to fly up and over and away from the work site, such an obstruction needs to be in place for a week or two before it’s full potential is realised. Protective clothing for the workmen is another option together with a smoker in operation. Anaesthetising the bees with CO² is another option, honeybees stand far higher levels of CO² than humans however the precautions needed to be taken have not nor will they be assessed by the writer. Chilling is a very successful method of controlling the bees and reducing those available for flying. The colony brood temperature has to be maintained at 90 Fahrenheit, bees are torpid at 40 Fahrenheit, they will cluster tight and raise the temperature by consuming food, oscillating the abdominal tergites, the resulting energy use gives off heat to raise the brood temperature, an air conditioning plant comes to mind.

Article by Peter Hutton. Photographs by Gregory Boon published with permission on Kentbee.com.
Copyright © 2002-8 by owners. All rights reserved.

You have a Honeybee Swarm who are you going to ...
Share