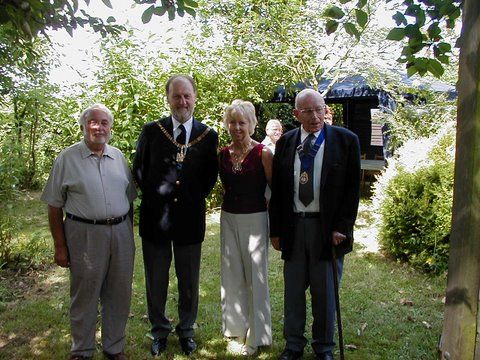 There is some sad news about one of our longest serving and most supportive members. I am indebted to Peter Baker and Cliff Ingram for the following brief notes, and to Rudy for the photo of Jim at Ruxley with Peter and John & Carol Eastaugh. The strength of our club is largely derived from the dedication of Jim and all those of his generation.

He was known to everyone, even his family, as Jim. When he started his first job as an office boy the previous one had been Jim and his workmates said they could not remember a new name so continued calling him Jim, and this stuck with him for the rest of his life.

Jim started beekeeping in the 1950’s when his son was at Colfe’s Grammar School which had a beehive. Jim helped out and became interested, started himself and joined Sidcup Branch and Ruxley Apiary. He was a prominent member over the years in all their activities, ably supported by his wife, Betty, who could always be relied on for the traditional apiary teas and organising catering for events. Jim was always good at encouraging others, and in recent years had been heartened by the growth of our branch and the development of a second apiary.

He was secretary of the Western Division of KBKA until the four divisions united and was on the KBKA Council for many years including a term as President.

Both Jim and Betty were part of a small group involved in erecting the present KBKA bee pavilion at the County Showground at Detling, where they met regularly and tended a quarter acre bee garden and organized the Bee Marquee for the County Agricultural Show.

He was also on the Executive Committee of the National Honey Show for many years including 20 as the Treasurer.

He will be missed by all his friends in beekeeping and our sincere sympathy goes out to his wife, Betty, his son and daughter and other members of the family.

Funeral is on Tuesday, 5th July at 3.15pm at Falconwood Crematorium. No flowers, donations to Alzeimers.