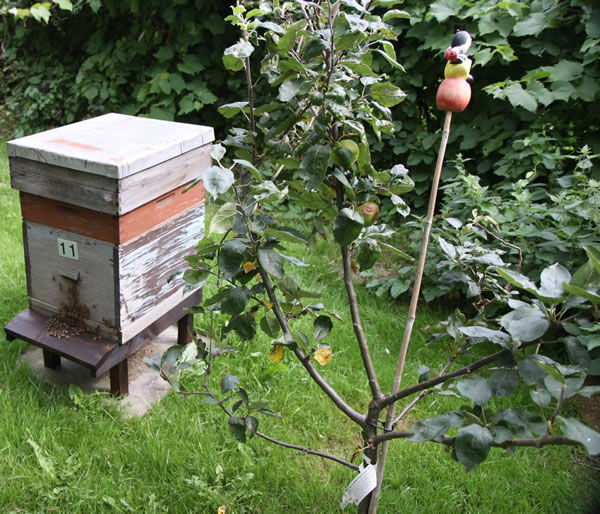 Reducing the Likelihood of Swarming, Examining Colonies in the Swarming Season

It is recommended therefore to have young queens in your hives. A beekeeper should re-queen his hives regularly and have queens from the previous season if possible. Nevertheless it is also valuable to keep some queens for their natural life in order to evaluate their potential as breeders.

Crowding, especially of the broodnest, is accepted as an important trigger to swarming. It may be that it disturbs the transmission of queen pheromone among workers.

Prevent crowding by giving super space early. Also ensure the brood box is not congested or contains too much unused stores. In a spring flow where the colony’s requirements are being met by incoming nectar, bees will be reluctant to break into sealed stores even where they restrict the broodnest. You can force them to move the stores by breaking through the cappings with a hive tool. Cut deeply to break the cell walls so as to force the bees to empty the cells to repair them.

Obtain and maintain a good strain of bee with low swarming tendency.

If you are raising your own queens and making your own judgement on this do not rely on the results of a single season.

Inspect hives weekly during May and June to check for signs of swarming.

A 7 day inspection interval is convenient for most. The 9 or 10 days often quoted is actually quite risky.

Open hive down to the queen excluder.

Smoke over the excluder and pause.

Separate the boxes and tip the top box to see the bottom of the frames. Smoke bees away if necessary.

The ‘tip test’ is a good, quick way of checking for swarming. It is said to work better with a shallow as the top brood box.

Note that the excluder is not separated from the top box unless a full inspection is needed.

The idea of smoking from above is to encourage the queen into the lower box where she will be needed if swarm control has to be done.

Queen cups with eggs may well not lead to swarming just yet, but a re-check after 5 days will tell you if the cells are developing before a swarm is lost.

If you are doing a full inspection and find the queen, put aside the frame she is on in a nucleus box to save having to look again should queen cells be found.
Empty queen cupsCharged queen cells